The 15 years old has brightened the world again it the light of her surprising win over Magdalena. It took her 1hour 30mins to beat Magdalena with a victory of 6-3, 6-3 win.

This same young supernova defeated her idol, Venus Williams, three days ago. She would be playing Slovenia’s Polona Hercog in the third round.

“I played well on pressure points. She was serving amazing. I’ve not been able to relax, there is so much going on”

“I believe I can beat anyone across the court.”

She becomes the youngest player to reach the last 32 at Wimbledon since fellow American Jennifer Capriati, who reached the semi-finals in 1991, also aged 15.

At such a tender age, Gauff is only eligible to play 10 tournaments at professional level between her 15th and 16th birthdays yet she appears to be taking the grand occasion of Wimbledon in her stride.

Earlier on Wednesday, she had trained briefly under the gaze of 18-time Grand Slam champion Rafael Nadal before being approached for a chat by Roger Federer, an eight-time winner here, more than six hours before she finally got to play. 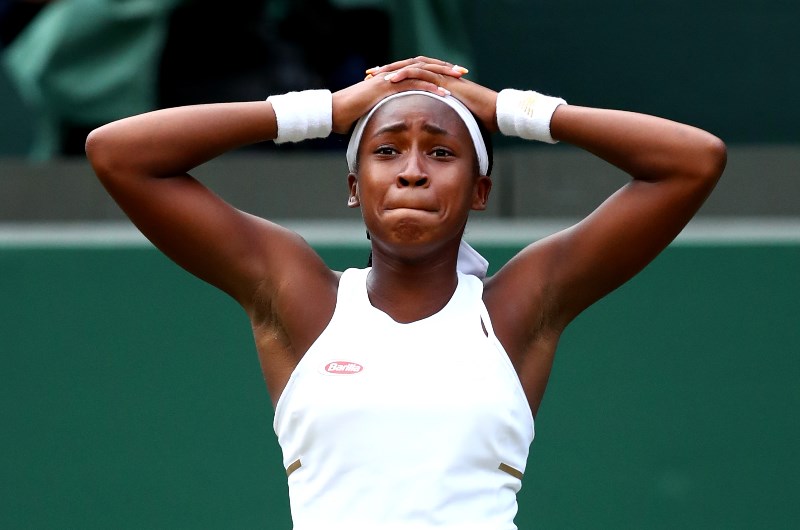 BBC commentary on the match

Gauff broke 30-year-old Rybarikova’s serve to love to go 4-2 up, losing just five points on her own serve throughout the entire first set.

Rybarikova, somewhat unsettled by the crowd’s fierce support for Gauff, had her serve broken once again early in the second set.

But, showing glimpses of the form that saw her formerly become the world number 17, Rybarikova started to rally, twice defying Gauff on break point.

Yet this was always to be Gauff’s night, and she saw out the win by breaking serve once again in front of a delighted crowd and in front of her ecstatic parents Corey and Candi.

Speaking after the match Gauff revealed that she has been using social media to help relax between matches and cope with her newfound fame.

“I wasn’t expecting any of this. A lot of celebrities were messaging, posting me. I’m kind of star struck. It’s been hard to reset. I don’t know,” she said.

“Surprisingly social media kind of relaxes me before the match. That’s what I kind of do. Right now I’m going to keep everything the same because it’s been working.”

‘Gauff is the favourite against Hercog’

“Hopefully her parents will handle this success well. There will be enormous offers and sponsorships galore.

“The way she’s playing at the moment and the way she’s acting – there aren’t many players she will lose to.

“Gauff is the favourite going into the match against Hercog.”

Gauff possible route to the final

So who could the 15-year-old face en route to a possible dream final a week on Saturday?

If she beats Hercog, then she could come up against former world number one Simona Halep in the fourth round.

And if she passes that challenge then 2018 Australian Open winner Caroline Wozniacki might await her in the quarter-final followed by the possibility of a semi-final match against the wily Karolina Pliskova.

And in the final? Current number one Ashleigh Barty or maybe one of her idols, Serena Williams.

Young supernova is adorning the skies and mesmerizing tennis lovers around the globe.

Serena Williams was handed a $10,000 (£8,000) fine for damaging one of the courts used at Wimbledon
Wimbledon 2019: Gauff the Young Supernova in the sky of Wimbledon

Wimbledon 2019: Gauff the Young Supernova in the sky of Wimbledon