Five members of a fraud syndicate that specialize in producing fake foreign currencies, have been arrested by the Kwara state police command. 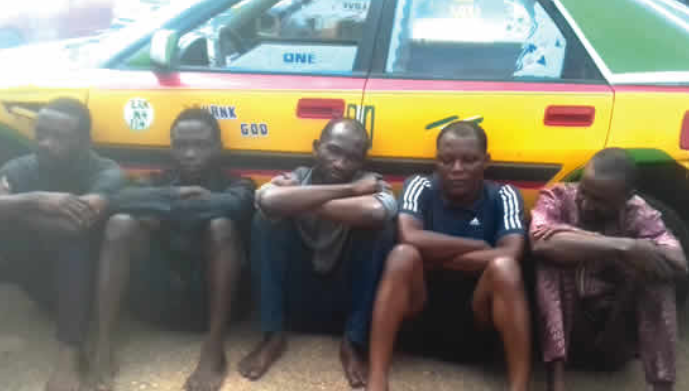 The suspects identified as Sesan Oguga, Owoyemi Gbenga, Sebile Oluwafemi, Adebayo Akeem and Ayoola Issac, who usually operate in threes, drive around the state in a Mazda 323 with the number plate, FUF 646 XA, painted in Kwara taxi colour. While one would act as a driver, two others would pretend as the passengers.

According to the suspects, they go around the state targeting good looking persons waiting by the roadside for a cab. After their victims had boarded the cab, they would initiate a discussion on mass production of foreign currencies. The greedy ones would fall prey and then would be defrauded.

Parading the suspects before newsmen, the state commissioner of police, Bolaji Fafowora, said the suspects had defrauded two victims, Mrs. Adekeye Feyisayo of N1.055m and Bilikis Abdulkareem and five others victims of N3.5m.

“The suspects pretend to be taxi operators and defraud their unsuspecting passengers.  Their operational vehicle, a Mazda 323 with registration number, FUF 646 XA, Kwara taxi colour, has been recovered.” he said

When interrogated, one of the suspected fraudsters, Adebayo Akeem, said they usually go after greedy people.

“Those people that have ojukokoro (greedy people) are the ones we collect money from. We have dealt with two people. At times, we connive with the aides of rich people to defraud them.” Akeem said