Five –time champions Nigeria will guarantee a return to the FIFA U17 World Cup finals if they overcome Angola’s U17 squad in their second match at the Africa U17 Cup of Nations in Dar es Salaam, Tanzania on Wednesday.

A reproachable slack approach saw the Golden Eaglets slump from 3-1 lead to conceding three goals and falling behind against host nation Tanzania in the tournament opener on Sunday, but they woke from slumber in good time to win with two spectacular goals and pocket three precious points in a 5-4 win. 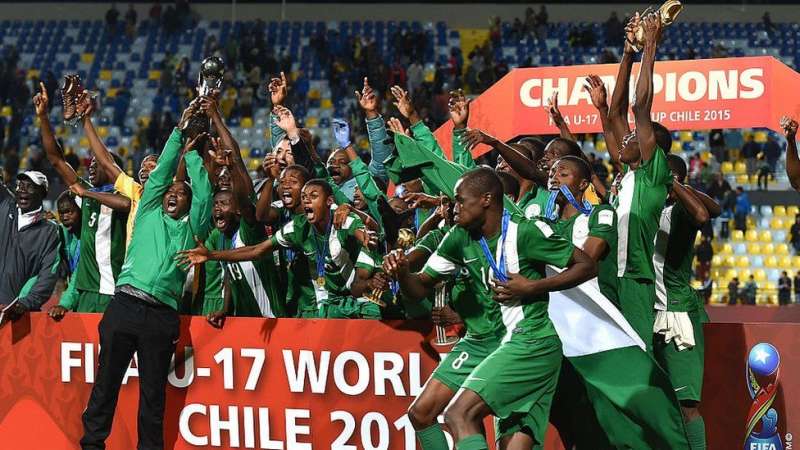 Angola’s 1-0 win over Uganda hours later has ensured that the winner of the top-of-the-table duel between Nigeria and Angola on Wednesday would have one leg in the semi finals and automatically in the FIFA U17 World Cup slated for Brazil later this year.

All four semi finalists at the ongoing championship in Tanzania will represent Africa in Brazil.

Two –goal hero against Tanzania, Wisdom Ubani and Man-of-the-Match Akinkunmi Ayobami Amoo will be the cynosure of all eyes in the Eaglets’ attacking line on Wednesday. Yet, Ibraheem Jabaar, who slammed in the winning goal against the Serengeti Boys minutes after coming on as a substitute, is also capable of making things happen, just as Olakunle Olusegun, Fawaz Abdullahi and Olatomi Olaniyan.

Current Head Coach, Manu Garba was also at the head of the technical team that won in the United Arab Emirates six years ago.

The Eaglets failed to even qualify for the continental finals held in Gabon in 2017, losing to Niger Republic in the final qualifying round. Mali, Ghana, Guinea and Niger Republic flew Africa’s flag at the last edition of the FIFA U17 World Cup finals, in India.

Mali edged Ghana in an all –African quarter final, only to lose 1-3 to Spain in the semi finals and falter 0-2 to Brazil in the match for third place.

The normally strong Malians, who also finished as tournament runners-up to Nigeria in Chile in 2015, are absent from the finals in Tanzania after losing the available WAFU A slots to Senegal and Guinea.

In Wednesday’s other match of Group A, hosts Tanzania will tackle Uganda in a match of two teams still hunting for their first points at the tournament.

UNILAG: Third Class Student Becomes Best PhD Graduate
JAMB: Why We Are Yet To Reveal Any Result