The attack, which was widely blamed on forces loyal to the Syrian government, was carried out on the town of Khan Sheikhoun, killing more than 80 people.

According to the book Fear: Trump in the White House, by Woodward, Trump wanted the US military to go into Syria and assassinate al-Assad.

Secretary of Defense James Mattis said the Pentagon would “get right on it” after Trump made his request, according to Woodward, but after getting off the phone with Trump, Mattis made it clear to his staff that they were not going to follow through with Trump’s plan.

“We’re not going to do any of that. We’re going to be much more measured,” Mattis said according to Woodward’s book.

Instead of targeting al-Assad personally, the Pentagon drew up plans for air attacks to take out Syrian military infrastructure.

Following those attacks on April 7, 2017, Trump praised the US military, saying the military personnel “represented the United States and the world so well”.

Congratulations to our great military men and women for representing the United States, and the world, so well in the Syria attack.

In an official response to the allegations, Mattis called the quotes used in Woodward’s book “fiction” and “a product of someone’s rich imagination,” adding that the publication was “a uniquely Washington brand of literature”.

“In serving in this administration, the idea that I would show contempt for the elected Commander-in-Chief, President Trump, or tolerate disrespect to the office of the President from within our Department of Defense, is a product of someone’s rich imagination,” Mattis’ statement said. 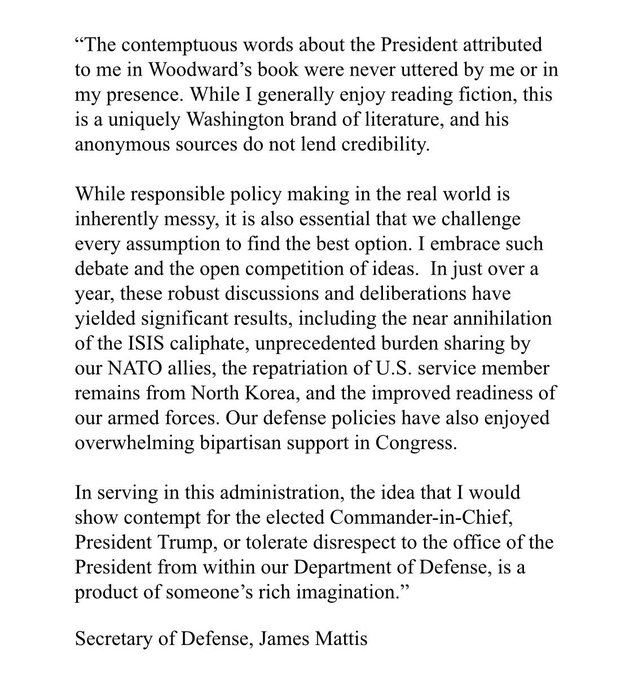 Trump also responded to the book, calling the quotes in the book “made up by frauds, a con on the public”.

The Woodward book has already been refuted and discredited by General (Secretary of Defense) James Mattis and General (Chief of Staff) John Kelly. Their quotes were made up frauds, a con on the public. Likewise other stories and quotes. Woodward is a Dem operative? Notice timing?

When asked about the allegations, US Ambassador to the UN Nikki Haley denied ever hearing threats made by Trump against al-Assad.

“I have not once ever heard the president talk about assassinating Assad,” Haley told Al Jazeera correspondent James Bays.

The Syrian government has always denied it was involved in the chemical attack, but an independent United Nations panel concluded the attack was carried out by al-Assad’s forces.

Woodward’s book also details several other encounters in the Trump White House between senior staff and the president.

According to the book, sources told Woodward that White House Chief of Staff John Kelly regularly lost his temper with Trump, calling him “unhinged” and “an idiot”, the Washington Post reported.

“It’s pointless to try to convince him of anything. He’s gone off the rails. We’re in Crazytown. I don’t even know why any of us are here. This is the worst job I’ve ever had,” the book quotes Kelly as saying according to unnamed sources.

Trump himself also railed against the people he appointed, including Attorney General Jeff Sessions and former White House Chief of Staff Reince Priebus, the book states.

Rob Porter, former staff secretary, was told by Trump to ignore whatever Priebus said, saying that Priebus was “a little rat”, Woodward wrote.

Attorney General Jeff Sessions, who has recently been targeted by Trump on Twitter for his recusal in Special Counsel Robert Mueller’s investigation into Russian interference in the 2016 US presidential election, was also alleged to have been criticised regularly by Trump.