President Donald Trump has ordered the expulsion of 60 Russian diplomats and the closure of the Russian consulate in Seattle after a former Russian spy and his daughter were the victims of an assassination attempt by a deadly nerve agent.

“Today President Donald J. Trump ordered the expulsion of dozens of Russian intelligence officers from the United States and the closure of the Russian consulate in Seattle due to its proximity to one of our submarine bases and Boeing,” read a statement from White House press secretary Sarah Sanders on Monday.

“Today’s actions make the United States safer by reducing Russia’s ability to spy on Americans and to conduct covert operations that threaten America’s national security,” the statement continued. “The United States stands ready to cooperate to build a better relationship with Russia, but this can only happen with a change in the Russian government’s behavior. “

The move by the U.S. took place in conjunction with 14 European countries, who also announced that they would be taking similar measures against Russia.

On March 4, ex-Russian Sergei Skripal and his daughter were both targeted in an attack with the rare and deadly Russian nerve agent Novichok. Both the British and American governments have accused Russia of being behind the plot to assassinate the Skripal, though Russia has consistently denied that allegation.

Russia’s ambassador to the United Kingdom, Alexander Yakovenko, has promised his host company that his country would fully cooperate with the investigation. 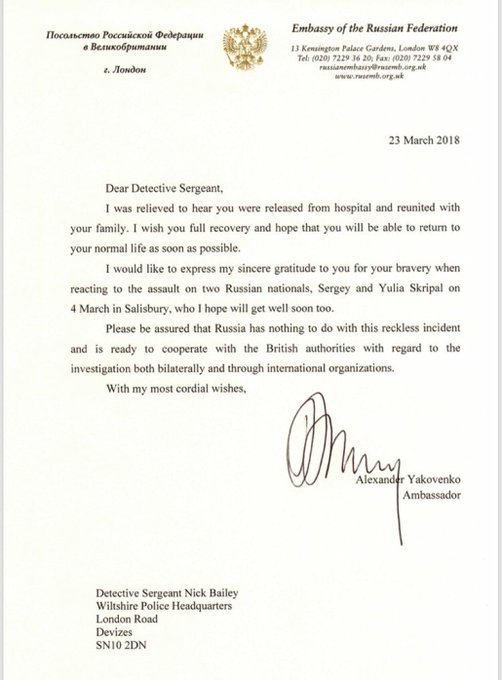 This is brazen…I’m not surprised, but it’s still disturbing.

UPDATE; El-Rufai reacts as NBA cancels his invitation to speak at conference

‘We Are Sorry For Our Mistakes’- PDP Tenders Unreserved Apology To Nigerians
85-Year-Old Woman Stabbed To Death, Set Ablaze By Thugs

UPDATE; El-Rufai reacts as NBA cancels his invitation to speak at conference

NBA;Withdraws Invitation to El-Rufai as Speaker in Annual Conference

The Many Lies Against Magu