Twenty days after their victory in the gubernatorial election in Lagos State, the Governor-elect, Mr Babajide Sanwo-Olu, and his running mate, Dr. Obafemi Hamzat, received their Certificates of Return from the Independent National Electoral Commission (INEC) in a ceremony held today at the commission’s office in Yaba, Lagos Mainland on Friday.

Clad in Agbada with caps to match, the Governor-elect and his deputy were accompanied to the carnival-like event by their wives, associates, family members and All Progressives Congress (APC) leaders, including the party chairman in Lagos, Hon. Tunde Balogun, party leader, Prince Tajudeen Olusi, and former Minister of State for Defence, Senator Musiliu Obanikoro, among others.

At exactly 11:30am, INEC National Commissioner in charge of Lagos, Ondo and Ogun states, Dr. Adekunle Ogunmola, presented the certificate to Sanwo-Olu, charging the governor-elect to be magnanimous in victory. Sanwo-Olu received the certificate in company of his wife, Dr. Ibijoke.

Ogunmola charged Sanwo-Olu and Hamzat to pursue reconciliation and close ranks with their opponents, reminding them that tolerance of opposition remains a key foundation of constitutional democracy. The INEC National Commissioner said the event marked the end of electioneering, pointing out that the electorates should be served with good governance. 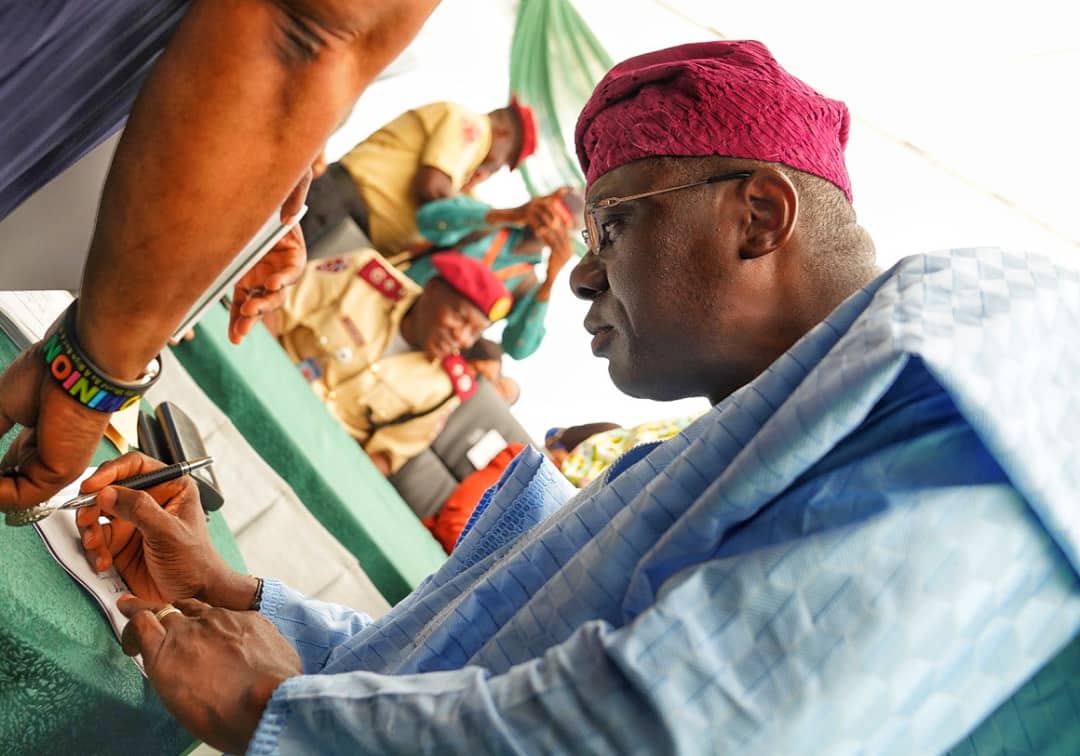 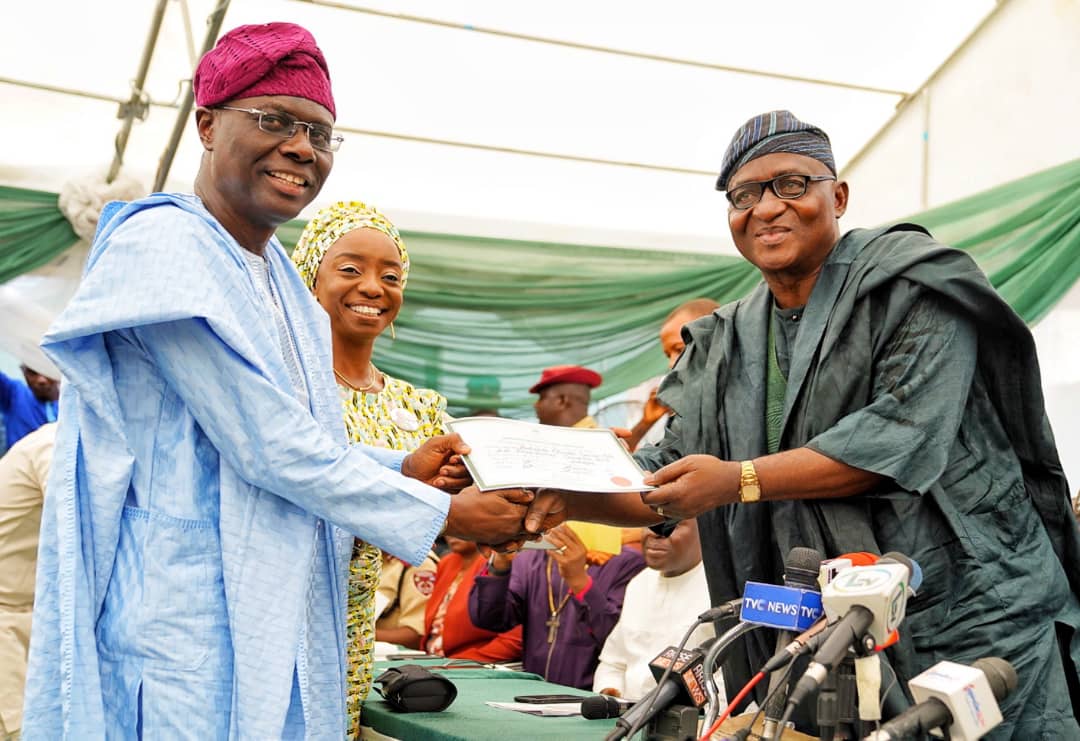 Pointing out that 45 political parties fielded governorship candidates in the election, Olumekun, however, lamented apathy among voters in some constituencies. He particularly made a reference to Eti-Osa Constituency 1, which recorded a four per cent voter turnout; a development he described as unprecedented.

He said: “The Lagosians have spoken and they spoke loudly with their votes. The task to move the state forward rests squarely on you and I urge you not to look at what happened during the campaign period. It is time for governance. I pray God be your guardian in this task.”

In his six-minute acceptance speech, Sanwo-Olu promised to lead “an all-inclusive government”, while extending a hand of fellowship to his opponents in the governorship race. He expressed joy that his victory was not tainted by violence and bloodshed, stressing that the process was free and fair.

The governor-elect specially paid a tribute to President Muhammadu Buhari, and APC National Leader, Asiwaju Bola Ahmed Tinubu, for displaying “responsible leadership”, which, he said, led to victory of APC in Lagos and the centre.

He said: “Our resolve to lead the state as governor and deputy governor is not about our personal welfare and that of our families, but a determination to build a state that all of us will be proud of. We will not disappoint Lagosians for the confidence reposed in us to lead on their behalf. We promise to lead a government that will be responsible and that will work for the greater majority of residents. 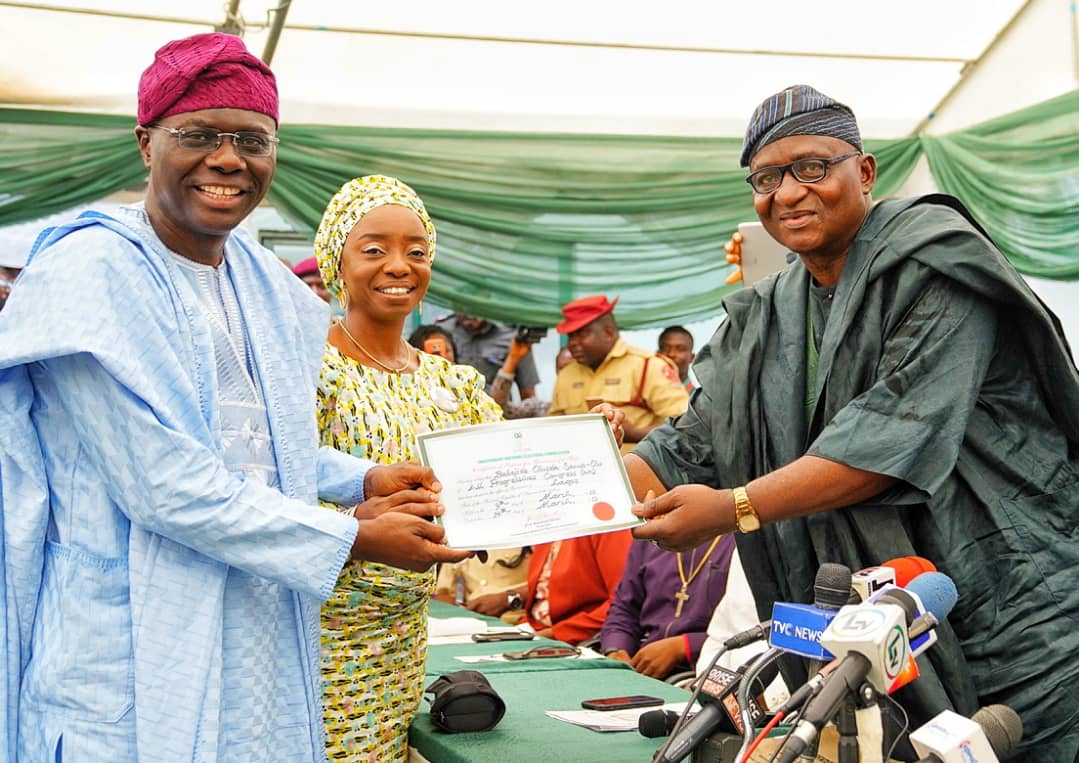 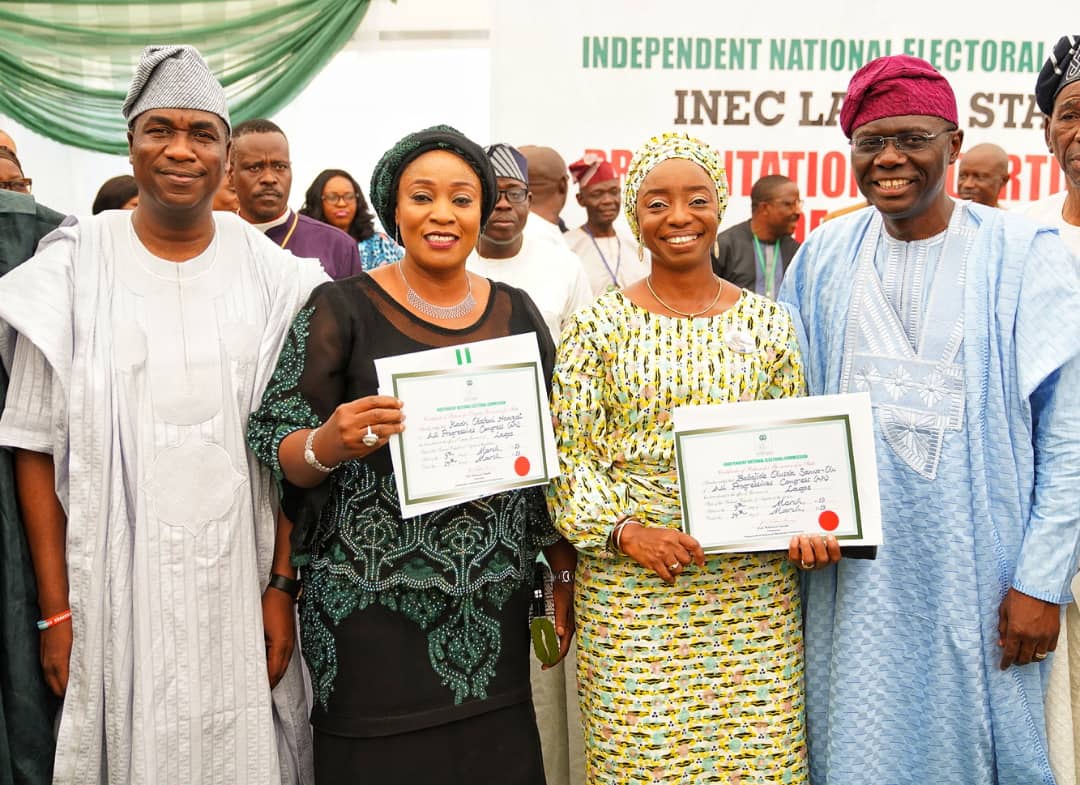 “Whatever happened during the campaign period belongs to the past. It’s time for reconciliation and the state must move forward. Therefore, we will not engage anyone or group based on their political affiliation, ethnic nationality or whether they voted for us or not, we are all Lagosians and we will run a government that will work for all.”

Sanwo-Olu also praised party leaders and members in the state for sacrificing their energy and time for the party’s victory.

The event ended with prayers for Sanwo-Olu and his deputy by representatives of Chief Imam of Lagos, Imam Shakir Gafar Mofesaiye, and chairman of the Lagos-chapter of the Christian Association of Nigeria (CAN), Bishop Theophilus Ajose.

Obaseki Advocates Use Of Tech To Preserve, Promote Indigenous Languages

Uwajumogu Was An Advocate Of Nigeria’s Unity, Says Lawan

Obaseki Advocates Use Of Tech To Preserve, Promote Indigenous Languages

Uwajumogu Was An Advocate Of Nigeria’s Unity, Says Lawan