Following this week’s video of Tyrese Gibson crying that he wants access to his daughter, Rapper 50 Cent has made it clear that he will not tolerate Tyrese Gibson’s weepy drama behavior on social media.Calling Tyrese a weak ass for claiming he is broke and now making fun of him after news emerged that he failed to visit his daughter twice.

50 cent shares screenshot of the news that Tyrese wouldn’t visit his daughter Shayla, he wrote: “Damn boy, get off your phone shut your IG page down.”

Taking it further,50 Makes reference to his claim that he is now broke, 50 Cent requested of Tyrese to sell him his watch and he’ll pay half the price since he’s badly in need of money.

“Oh and um sell me that watch you got on in this picture. I’ll give you half price. LOL ” 50 Cent wrote 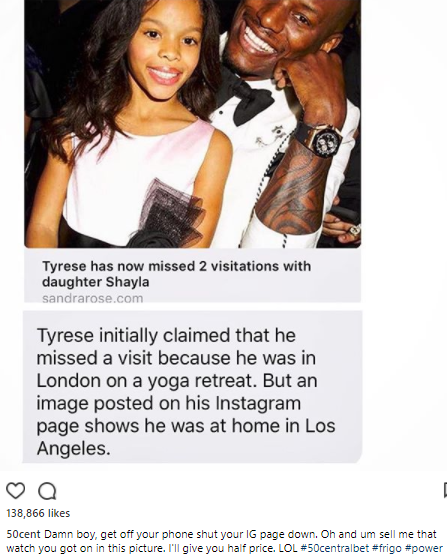 20 Pictures From The 4th Edition Of “Bovi Man On Fire”