The Rivers state police command have uncovered a baby factory in the state that was being operated by a clergywoman, Glory Rapheal. 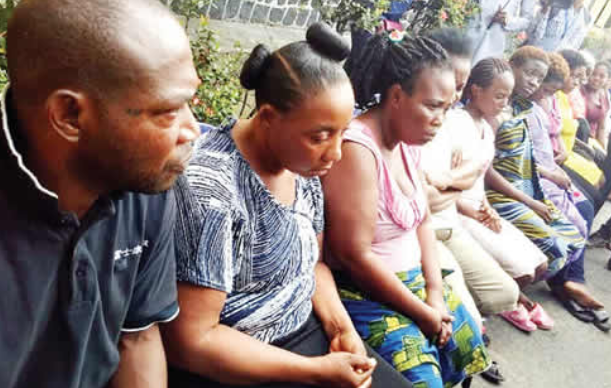 The baby factory had 16 pregnant girls in waiting for their babies to be sold. The police arrested the 16 girls and 3 others working with the clergywoman to run the factory.

Parading the suspects before newsmen, the state commissioner of Police, Ahmed Zaki, said

“Men of the Criminal Intelligence and Investigation Department, CIID, in a sting operation on Friday, stormed the premises of one Gloria Raphael and the General Overseer of Mount Sinai Ministry at Rukpokwu, who is into the business of child trafficking and sale. 16 pregnant women were arrested. One of them by name Chinyere Nweke entered labour on Saturday and was rushed to the Police clinic, where she gave birth to a baby girl”

When interrogated, the cleric, Gloria Raphael, denied the allegation of running a baby factory. According to her, the women came to her for prayers.

“There was a day my sister, Esther Joseph, called me to come and help her, saying somebody was sick. So they brought the girl. She brought two girls to me and they were having discharge. So I called a midwife to deliver them. Some of the girls came for prayers; they have husbands.”

One of the pregnant girls, Sandra Solomon, said she decided to come to the factory after she was told they can help her sell her baby. According to her, she is poor and cannot cater for a child now.

“I became pregnant and I didn’t know what to do. A lady told me that they sell babies in that church, so I came. The woman did not tell me how much they sell each baby. As we were sleeping in the church, Police came and arrested all of us. I don’t want to sell my baby.” she said

Another five-month pregnant girl, aged 17 years, said: “The person that got me pregnant brought me to the woman’s house. He said I should stay with the woman and that when I put to bed, he will come and pick me.”