The General election is just a few hours away, and Nigerians are ready to exercise their civic responsibilities at the polling booth. This is the profile of the two Candidates of the toughest political parties, ( APC, PDP ).

Four years ago, Buhari worked to persuade voters they had nothing to fear from his former life as a no-nonsense army general who headed a military government in the 1980s.

The self-styled “converted democrat” used that past to good effect, shaking up the military response to Boko Haram’s Islamist insurgency and starting an anti-corruption drive.

The 76-year-old has positioned himself as a proponent of “big government”, promising to create 10 million jobs, build much-needed roads, rail and other transport infrastructure. 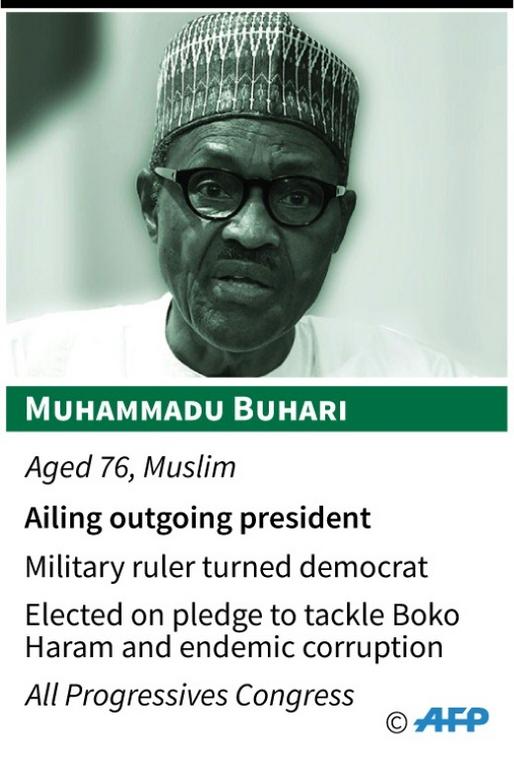 Overall, he is pushing for another four years to finish what he started.

But his pledges on security have come under scrutiny, with an increase in Boko Haram attacks in the northeast setting back initial gains, and new security concerns around the country.

High levels of inflation, the cost of living and the effects of recession caused by the slump in global oil prices have led to criticisms about his stewardship of the economy.

Buhari has also faced charges of authoritarianism, in particular using the state security apparatus to target political opponents accused of graft and rejection of legal due process.

On January 25, he suspended the country’s chief justice after he was charged with non-disclosure of assets, leading to charges of executive meddling in the judiciary.

Many critics called that an “attempted coup against the judiciary” — emotive words in a country which has seen six successful military coups since independence in 1960.

But uppermost in many people’s minds has been Buhari’s ability to serve another term — and keep his grip on power — after he spent nearly six months undergoing medical treatment abroad.

Buhari, from Daura, in the northern state of Katsina, divorced his first wife, Safinatu, with whom he had five children.

Aisha, whom he married in 1989, is his second wife. They also have five children. 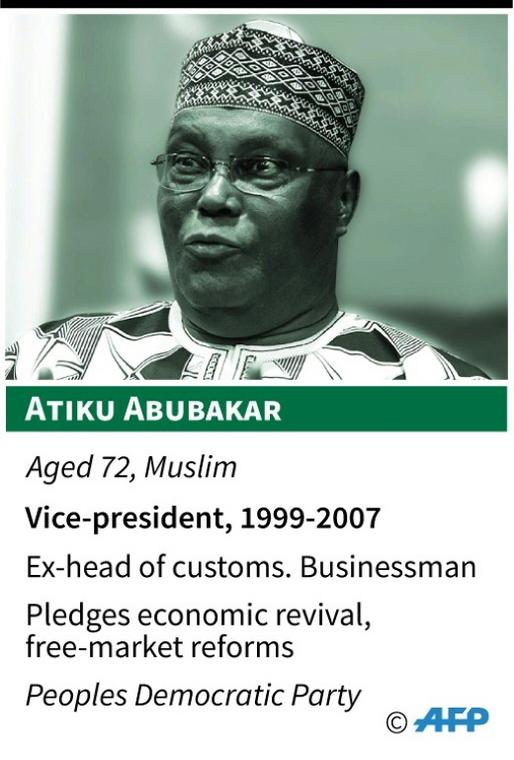 Atiku Abubakar is well-known to Nigerian voters, having been vice president under Olusegun Obasanjo from 1999 to 2007, and is a serial presidential contender.

The 72-year-old businessman has outlined a number of free market reforms and is seen by some as the candidate most likely to turn around Nigeria’s economic fortunes.

Abubakar has deliberately courted younger voters online, revealing personal details such as his love of Arsenal football club, the music of Fela Kuti and Spiderman.

He has repeatedly characterised Buhari as old, infirm and out of touch and championed education initiatives, including his creation of an elite university in his home state.

But he has long been dogged by allegations of corruption dating back to his time as head of the customs service and time as Obasanjo’s deputy.

Buhari’s All Progressives Congress (APC) has highlighted allegations of electoral malpractices under the Obasanjo/Abubakar regime, and failed privatisation schemes.

His campaign team sought to debunk the widespread belief that he could not travel to the United States for fear of arrest because of his alleged links to corruption claims.

But his trip to Washington in January only raised more questions, after it emerged he had engaged a lobbyist linked to US President Donald Trump and stayed at a Trump hotel.

Those questions are unlikely to go away should he win.

Abubakar, from Adamawa in northeast Nigeria, has three wives, more than 20 children and dozens more grandchildren.