A 52-year-old Georgia man convicted of shooting and killing his ex-girlfriend and one of her friends during an argument in 1994 is scheduled to be executed in Georgia on Thursday.

Scotty Garnell Morrow is scheduled to be executed by lethal injection at 7 p.m. local time (2300 GMT) at Georgia Diagnostic and Classification Prison in Jackson.

On the morning of Dec. 29, 1994, a couple of weeks after Barbara Young ended a relationship with Morrow because of his abusive behavior, he went to her Gainesville home. An argument ensued as Young’s friends Tonya Woods and LaToya Horne and her two children looked on, according to court documents detailing testimony during the trial.

During the fight, Morrow pulled out a gun from his waistband and shot Woods in the abdomen and Horne in the arm. Young fled into a bedroom where Morrow beat her before he shot and killed her. He went into the kitchen where he shot and killed Woods, court papers showed.

Horne fled to a neighbor’s house as police responded to the shooting and the murder weapon was later found hidden in the backyard of Morrow’s house. Morrow confessed to the killings after his arrest. During the trial, he admitted he shot the victims because he “wanted [Ms. Woods] to shut up,” court documents said.

Since 2001, several state and federal courts have denied Morrow’s appeals based on various grounds. The United States Supreme Court denied Morrow’s request to appeal in February.

He was asked to request for his Last Meal. 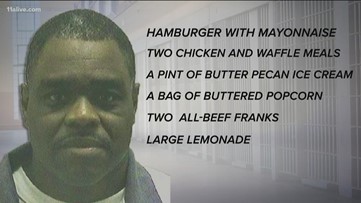 B’Haram, ISWA, Fulani Militia Would Have Been Crushed If Obasanjo Was President- Fani-Kayode

Church Exposed For Recruiting Teenagers Into Prostitution In Osun