Abdularasheed Maina has demanded that a new judge be assigned to his criminal trial before a Federal High Court in Abuja. 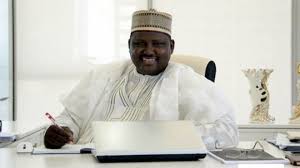 The former pension boss accused the judge over his matter, Justice Okon Abang, of being unfair to him

Maina’s allegation followed a directive by Justice Abang that the defendant desist from staring at him while delivering a ruling on the matter.

The chairman of the defunct Pension Reform Task Team, Abdulrasheed Maina, on Wednesday, October 30, accused a judge of the Federal High Court of being unfair to him.

Speaking through his counsel, Joe Gadzama, at the commencement of his trial before Justice Okon Abang, Maina said the judge took an exception to him in court.

Justice Abang had during the ruling, asked the defendant to desist from looking at him while delivering ruling on the case.

The judge told the court registrar to tell Maina to stop looking at him to enable him to concentrate on the ruling.

The court registrar following the judge’s directive asked Maina to stop looking at the judge and look at the prosecution.

The Nation reports that Gadzama, who stood in for a senior advocate of Nigeria, Ahmed Raji, also sought for the case to be re-assigned to another judge over the issue.

However, in his defence, Justice Abang said he would usually caution defendants in court over their conduct if he felt threatened by their actions.

Gadzama said as a result of the judge’s remark, his client had informed him that his high blood pressure rose as he felt he had already been convicted.

Meanwhile, it was  reported that Maina would obviously remain in prison custody until Wednesday, November 6, when ruling on his bail application would be delivered.

The former pension boss had through his counsel, had applied for bail before Justice Abang and the matter was adjourned to Wednesday, November 6.

BREAKING: Russia Recommends COVID-19 Vaccine For People Between 18 And 60 Years

BREAKING: Russia Recommends COVID-19 Vaccine For People Between 18 And 60 Years

BBNaija: I Respect Lilo’s Decision To Dump Me For Her Boyfriend- Eric