The Sweden International will not feature in LA Galaxy’s next two matches against Colorado and Orlando City for grabbing NYCFC goalkeeper Seah Johnson by his neck.

Zlatan ibrahimovic since his transfer to Major League Soccer has made the news lot of times but MLS Officials have stepped in after the latest was more negative and has meted out some punishment.

Ibrahimovic has been suspended by the MLS for two matches for grabbing New York City goalkeeper Sean Johnson by the throat during their win against the Galaxy last Saturday. Hence the Swedish Star will miss the matches against Colorado Rapids on Sunday and then the visit to Orlando City on May 24.

Ibrahimovic and Johnson were issued yellow cards during the match. The league’s disciplinary committee has now cited Ibrahimovic for violent conduct, for what the committee deemed to be a malicious act. The suspension was announced on Friday evening. 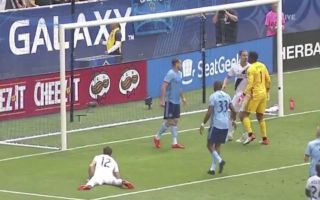 Both players, Ibrahimovic and Johnson, were issued yellow cards during the match. The disciplinary committee of the league has now cited Ibrahimovic for violent conduct, for what was deemed by the committee to be a violent act.

That incident wasn’t the first controversial moment for Ibrahimovic in recent weeks.

He made headlines on April 28 for a trash-talking incident with Real Salt Lake defender Nedum Onuoha. The two opponents exchanged words during the match, including Ibrahimovic gloating in Onuoha’s face after scoring the eventual winning goal.

After the match, Ibrahimovic went to the Real Salt Lake locker room, presumably to offer an olive branch to Onuoha, but the RSL defender rejected the forward’s visit and criticized him for trash talking and making threats during the match. Onuoha also suggested that Ibrahimovic is allowed to get away with behavior that other players wouldn’t.

Last week, Ibrahimovic was issued a fine by MLS for diving during a loss to the Columbus Crew. The forward went to ground in the Crew box without being touched during a 3-1 loss for the Galaxy.

Ibrahimovic isn’t the first superstar to be suspended by MLS for on-field misbehavior. Both David Beckham and Thierry Henry were issued suspensions during their time in the league for on-field transgressions.