Governor Ayodele Fayose of Ekiti State has appeared in public for the first time after his deputy, Kolapo Olusola-Eleka, lost the governorship election conducted on Saturday.

Olusola-Eleka of the Peoples Democratic Party (PDP) came second in the poll with 178,121 votes, while former Minister of Mines and Steel Development and candidate of the All Progressives Congress (APC), Dr Kayode Fayemi, was declared winner with 197,459 votes.

Fayose was seen as the biggest loser in the election going by the way he campaigned against the APC-led Federal Government and vowed that his candidate would not lose the election.

He accused the police of attacking him and was seen wearing a neck brace days before the election.

Two days after the result of the election was officially announced by the Independent National Electoral Commission (INEC), Fayose came out publicly for the first time on Tuesday.

He was seen walking the street of Ado-Ekiti the state capital in a video posted on social media by his spokesperson, Lere Olayinka.

The governor who was hailed by people on the street was on his way to the palace of the Ewi of Ado-Ekiti, Oba Rufus Adejugbe. 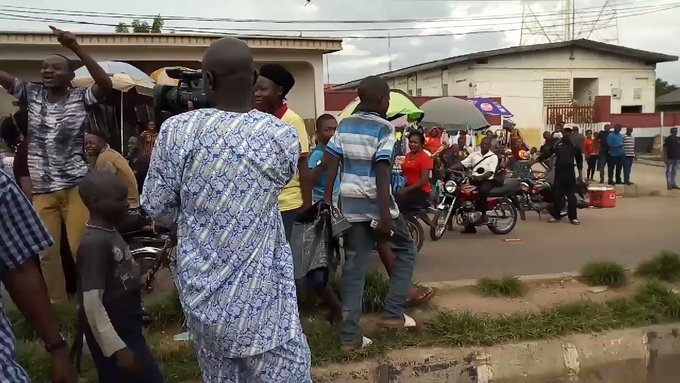 At the palace of the Ewi, the governor said it was unfortunate that he and his supporters were still being hounded after the election had come and gone.

“I have come to officially tell you, sir, as the Paramount Ruler of Ado-Ekiti, the state capital, that the Government House was invaded by the police. As we speak, over 300 innocent people are in detention. Since the day of the election, I have not been able to come out. My security aides have been withdrawn, continuously I have been harassed. It is dark hours in our history.

“After the poll on Saturday, my wife was prevented from entering the Government House for about 45 minutes. Since last Wednesday, security agents had laid siege to the Government House, and were subjecting people to untold hardship coming in or going out.

“The poll has come and gone irrespective of what we went through. The constitution says I am still the governor till October 16 this year. Our state radio and television stations have been shut down. And there has been no means of getting across to our people.

“It was only this morning that security agents at the entrance of the Government House were withdrawn. If we have been robbed, I still have a right to life and my family has a right to life too,” he said.

“The man that won has three units of the police protecting him. All my security men have been withdrawn since last Wednesday. I am only left with just a few.

“Harassing me is not in the interest of democracy. People must intervene before things go out of hand. I don’t know why we should be in this situation in 2018,” he said.

Oba Adejugbe, in his reply, thanked God that nobody died during the poll.

The monarch appealed to security agencies to restore the governor’s security aides.

“As Ekiti leaders, we will intervene. You, Fayemi and Eleka are our sons. Peace must be allowed to reign. We need peace in our state,” he said.