A former Attorney General of the Federation (AGF) and Minister of Justice, Mr. Mohammed Adoke, has returned to the country.

Mr. Adoke’s aircraft touched down at the Nnamdi Azikiwe International Airport in Abuja at about 3:40 pm on Thursday.

He was, thereafter, whisked away from the foot of the aircraft by security operatives and taken to the office of INTERPOL in the Federal Capital Territory (FCT).

Adoke is facing charges bordering on alleged abuse of office and money laundering with respect to the granting of the Oil Prospecting License (OPL) 245 to Shell and ENI.

The Economic and Financial Crimes Commission (EFCC) filed the charges against the former AGF and four others on behalf of the Nigerian Government. 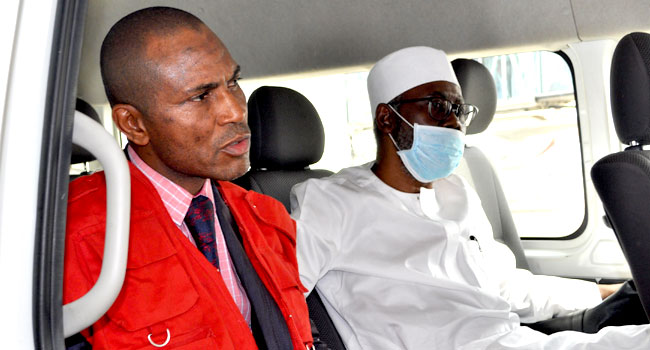 Following its inability to produce the defendants in court, the anti-graft agency approached a Federal Capital Territory High Court in Abuja on April 17 to secure a warrant of arrest against them.

The court granted the request by the EFCC, leading to Adoke’s arrest by the police in Dubai in November.

The Chairman of the Presidential Advisory Committee Against Corruption (PACAC), Professor Itse Sagay, confirmed Adoke’s arrest about a week later during a courtesy visit to the EFCC headquarters.

Earlier, lawyer to Mr Adoke and Senior Advocate of Nigeria, Mike Ozekhome, announced that his client had been released and was already on his way to Nigeria.

Ozekhome, in the statement forwarded to Channels Television, insisted that the former AGF was not extradited but was set free by the police in Dubai.

According to him, Adoke gave assurance to the police in the United Arab Emirates (UAE) city that he wants to go home and “solve his problems back at home”.

“I can confirm to you authoritatively that Adoke has been released from the custody of the INTERPOL and will arrive in Nigeria at any moment.

“He was let off the hook because nothing incriminating was found on him and he has on his own volition opted to come back to Nigeria,” the senior advocate said.

Ozekhome added, “Adoke is not extradited by the Nigerian government because there is no reason for that. He is coming back to Nigeria to clear his name from the alleged Malabu oil scandal.

“He is innocent of the allegations against him, Adoke has not done anything wrong. He is already airborne and will land in Nigeria this afternoon today Thursday.”

The EFCC also confirmed Adoke’s return to the country on its verified Twitter handle.

It said the former AGF was accompanied by INTERPOL officers on Emirates Airlines Flight 785 while operatives of the anti-graft agency were on the ground at the airport.

The aircraft, according to the EFCC, departed the Emirati commercial capital at about 8am Nigerian time.