As a result, pleads with funke akindele to give him a spot in her tv series, ‘jenifa’s dairy’.

The singer appealed to Funke Akindele to feature him on her hit series during an Instagram live video.

The ‘Jenifa’ star also prayed for Zlatan Ibile in the Yoruba language during the brief Instagram live video.

“We will both remain successful, may we not be put to shame, god made us the head, may we not fail. Zlatan,” akinde bello prayed.

“Please ma, don’t forget me for the next episode oo,”

Funke Akindele-Bello responded to his plea by promising to hook up with him soon. 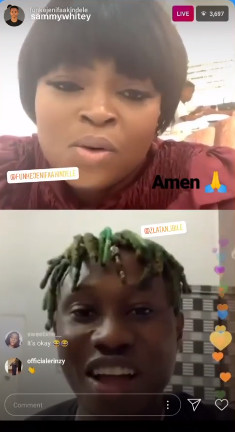 READ ALSO: “I Wonder What My Father Was Doing When Dangote Was Becoming Rich” Tonto Dikeh Wails

Davido And Chioma Unfollow Each Other On Instagram, As Chioma And Peruzzi’s Secret Got Revealed

Davido And Chioma Unfollow Each Other On Instagram, As Chioma And Peruzzi’s Secret Got Revealed