Kano, the sprawling Commercial nerve centre of the Northern Nigeria, came alive on Saturday December 14, 2019. It was an awesome weekend for the people of the city which is the hometown of two of Africa’s richest men—Aliko Dangote and Isyaku Rabiu. They played perfect host as the stars of Nigerian film industry flew into the city for a weekend of creativity, fun and reward.

In their hundreds, Nollywood’s best breezed in —from legendary filmmaker Tade Ogidan to veteran thespian Sadiq Daba; from the stars of new Nollywood like Desmond Elliot to Kunle Afolayan and mixed with scores of fresh stars like Eyinna Nwigwe, Ibrahim Yekini, Omowunmi Dada, Lateef Adedimeji and Bimbo Martins.

From Kannywood, a subdivision of the Nigerian movie industry based up North that covers Hausa speaking people, one of their best thespians, Ali Nuhu was the real MVP. He was everywhere ensuring that his colleagues had a blast while in his domain. Kannywood veteran, Rukayya Umar Santa illuminated the night alongside her younger colleague Bilikisu Abdullahi.

Most of Kano’s major hotels felt the stars’ presence. From Chilla Luxury Suites to Tahir Guest Palace and then R&K Hotels —they were fully booked. The Nollywood stars actually make the city roared to life in a spectacular manner.

There had been a massive buzz in the city ahead of the awards night. Two days earlier, the organisers had gathered select Nollywood stars mixed with top Kannywood actors to jawjaw at a Nollywood Town House Meeting with the theme of “Making Kano The Hub of Kannywood”.

On the eve of the awards night, amidst the wind off Harmatan, many of the stars stormed some of the city’s hangouts including Elegantee and Mozinda. Of course, everything was done in moderation given that in the State was a partial Shari’a officially in practice, complete with Hisbah, the vigilantes of Islam. But it appeared the Hisbah were on break as there wasn’t any shade of their operatives on sight perhaps, they also might have been swooned by some of the belles and beaus of the industry who were in their beautiful city. 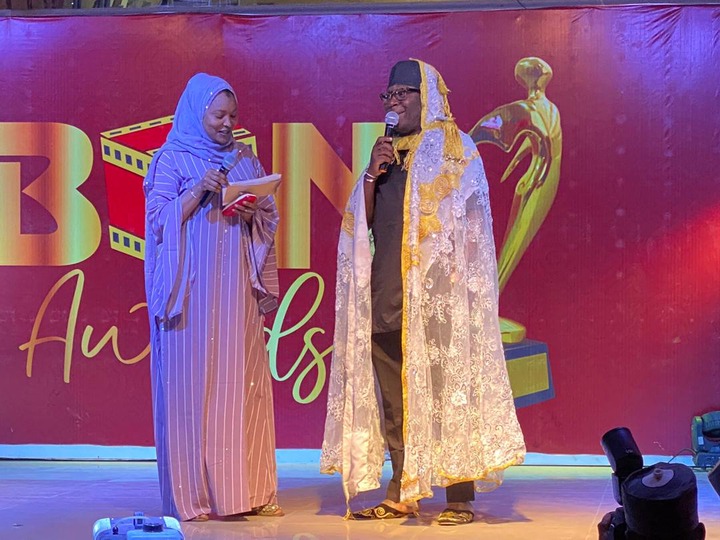 As vast as Nigeria is, so is her film industry called Nollywood. And of course, Kannywood. The Kano-based film industry is providing jobs and business to the city, something that went a long way towards improving public opinion of the profession. It helps that major mobile providers have contracted Kannywood stars as their brand ambassadors in multimillion-naira deals. However, Kano justified her credit as the hub of film business in the North with her hosting the first edition of the Best of Nollywood awards to be held on Northern soil.

Inside Coronation Hall of the Kano State Government House, the actors defied the divisions and ethnic lines in the Nigerian movie industry to deliver an awards night that are inclusive. The last time Kano hosted such huge number of actor gathered together in one place was sometime in July 2016 when President Muhammadu Buhari had an interactive session with Kannywood film practitioners in the city of Kano where a N4billion Film Village project was proposed to be cited in the State Capital. The film Village was supposed to give Kannywood stakeholders befitting world class cinemas, world class film theaters, training places, studios, standard film marketing places and many more.

But sadly, the project idea generated serious debate among Muslim clerics especially those in Kano where the project was supposed to be situated. They kicked against it and then, three years after, the idea fizzled out. And that was the last time the city had a pool of great actors in one place. But that changed last weekend when the 11th edition of Best of Nollywood Awards took place in the city. 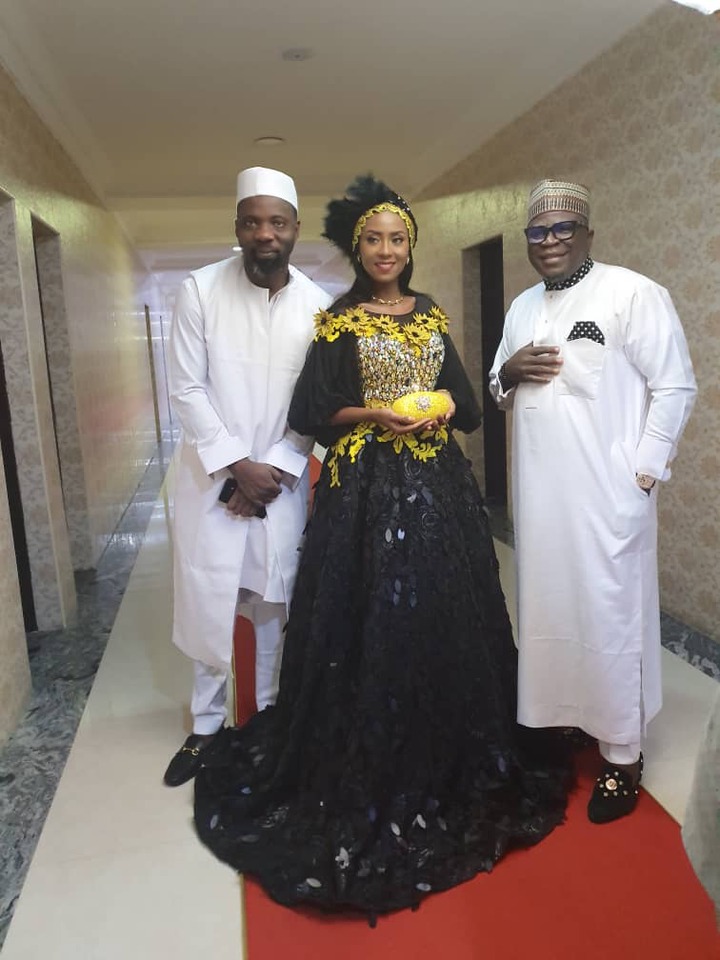 The stars sizzled. The show hosts— Gbenga Adeyinka 1st and Maryam Booth—were terrific pair. Kano actually bubbled. At the awards night was the State Governor and Chief Host, Dr. Abdullahi Ganduje. Also in attendance were members of the National Assembly from the State, some members of the State Executive Council as well as some traditional rulers and prominent Kano citizens.

Veteran filmmaker, Tade Ogidan and his latest film, Gold Statue ruled the awards chart at the awards event on its 11th year. Ogidan’s ‘Gold Statue’ and its lead actor, Gabriel Afolayan emerged the biggest winners as both clinched the coveted ‘Movie of the Year’ and ‘Best Actor of the Year’ respectively.

The film, which also earned Ogidan the honour of ‘Director of the Year’, also got the awards for the ‘Movie With the Best Production Design’, ‘Film With The Best Use of Sound’ and ‘Best Use of Make-up in a Movie’ to make the total haul of six statues. 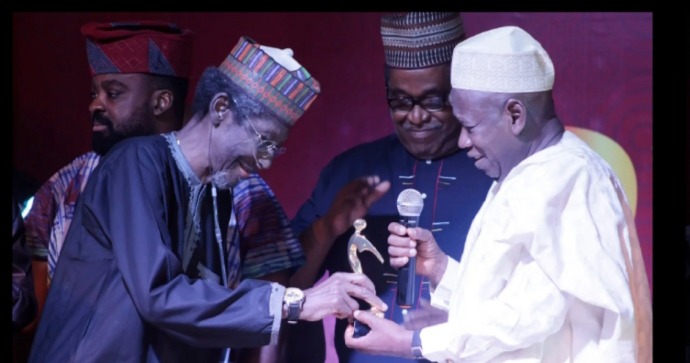 The highlight of the night was the presentation of the Lifetime Achievement Award to action ac and broadcaster, Sadiq Daba. While presenting the awards to the ailing seasoned thespian, Governor Ganduje appreciated the immense talent of Daba —he is from Kano— and congratulated him for the well deserving recognition. He later announced a donation of N1 million to Daba for his upkeep.

Sadiq Daba, in his response, said the honour was the greatest ever done him as he felt so proud to be honoured in his hometown and by his home state governor.

Daba said as long as he lives, he will ensure that Kano takes its place in the history of movie industry in Nigeria.

In his speech, the governor welcomed everyone to Kano. He said the state decided to support the Awards as part of the effort to grow the creative industry in the State and create jobs for so many citizens of the state. He said Kano, not only pride itself as the centre of commerce and industry in the North, but also play a critical role in the growth of creative industry.

The visibly excited and satisfied Governor Ganduje waited till the end to see the wrap of the event. He even not in a hurry, as he returned to the red carpet to take selfies with some willing stars.

Yes, there are queries over some technical and production lapses; there were silent murmuring over the absence of the key awards winners to pick their diadems. But the incontrovertible fact is the razzmatazz that pervaded the red carpet and the main show despite the very conservative nature of the host state.

With support from Kano State Government, PAN Automobile, Max Air and LaCasera, this year’s event, as promised by the BON Awards founder and executive producer, Mr. Seun Oloketuyi, delivered as expected with seamless fusion of Kannywood with the rest of Nollywood.

In a chat with this writer, Oloketuyi said there was initial deep suspicion expressed by some Kannywood stakeholders but majority gave their support as they ensure the success of the awards event.

He described Kano as “a total new experience for me. The people showed so much love and I already have a different view of the Northerners now”.