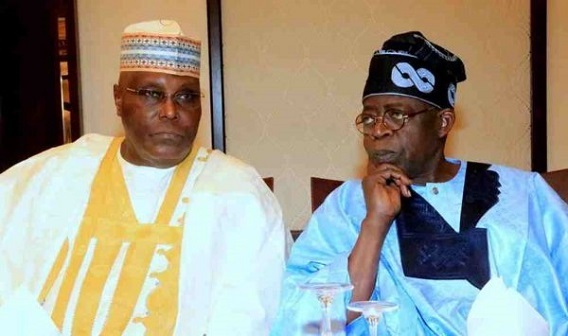 Former Vice President Atiku Abubakar on Saturday, January 11; revealed what transpired in his meeting with the National Leader of the All Progressives Congress (APC), Bola Tinubu; Vice President Yemi Osinbajo as well as the Chief of Staff to President Muhammadu Buhari, Abba Kyari in Abuja.

According to Atiku, the meeting had no political undertone but just a chance meeting at a wedding.

The presidential candidate of the Peoples Democratic Party (PDP) in the 2019 general elections; was spotted having cheerful discussions with the political heavyweights at the Al-Nur Mosque in Abuja.

This was during the wedding of the daughter of the pioneer Chairman of the Economic and Financial Crimes Commission (EFCC), Nuhu Ribadu.

The former Vice President, through his Media Adviser, Paul Ibe; dismissed insinuations that the meeting had a political undertone.

He also noted important figures in the nation’s political space also attended the wedding of his son; Mustapha, at the Sultan Bello Mosque, Kaduna on December 14, 2019.

“When people are invited to a wedding Fatiha; nobody should make undue interpretation beyond that otherwise every other meeting at every other wedding or social event will be interpreted one way or the other.