Anthony Joshua is working with the Navy Seals and a psychologist for the first time in his professional career after making significant changes to his training camp routine. The three-belt world champion is poised to make his debut in America at Madison Square Garden 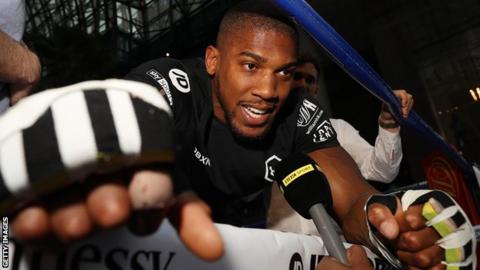 Heading into his 23rd professional fight, Joshua has made some changes to his training camp after feeling drained by his usual workload. ‘We all came together around a table and talked about where I’m struggling,’ Joshua explained. ‘Rob [McCracken] spoke about where he’s struggling and where he wants to improve, as did the strength and conditioning coach, the commercial team, the physios, the nutritionist, everyone opened up. ‘So we brought in a psychologist, we wrote everything down and we’ve been working on it every day.’

Joshua worked with a psychologist during his Team GB days, and the 29-year-old revealed how his new team member inspired a reboot of his 16-week camp routine. ‘Everyone that I work with now, I’ve been working with for ten or 11 years,’ Joshua said. ‘This is the first time I have worked with a psychologist as a pro. We were talking about improving because I don’t know how long I can keep going through these training camps because they’re seriously f****** me over, big time.

‘There’s a massive amount of work you need to do, no matter how you’re feeling; f*** it, get on with it, that’s boxing. ‘We spoke to a lot of teams we work with that [manager] Freddie [Cunningham] had brought to the table. ‘We partnered up with people who are performance-based and they brought in Navy Seal experts, team-bonding experts, all experts in different types of field, where you’re trying to achieve a goal.’

The addition of the Navy Seal expert helped Joshua strategize what he should be doing when a fight goes against him, like when he was dumped to the canvas for the first time in his pro career. Wladimir Klitschko knocked Joshua down in their 2017 war at Wembley, before the IBF champion rallied to secure a late stoppage and add the WBA (Super) belt to his world title collection. ‘Navy Seals are put in situations where they are under a lot of pressure to see how they react,’ Joshua said. ‘As a team, we had one of those weeks where we all went out together, a Navy Seal guy showed us army pictures of people getting shot and how they deal with those situations, how they controlled that [pressure situation]. ‘Say I have a plan to beat Ruiz on Saturday. He goes out and clips me with a big shot, how do I deal with that situation? ‘The good thing is that I’ve got to a situation where I have a lot of information from what I’ve done over the years. There’s a lot to talk about. I didn’t have this at the start of my career because there wasn’t much to talk about.

‘Because of all this, I’ve been able to do more. I was training at the weekends when I should have been resting. I asked Rob [McCracken] if I could do some training because I went back to the purpose of this particular week and worked harder on that purpose. ‘The purpose is to work on that right hand, but be creative with it, drop that left. ‘It’s about having fun with it as well. Even as a kid, you want to learn, but you have to make it fun, so we want to make training purposeful rather than just beating myself. Boxing is so hard.’